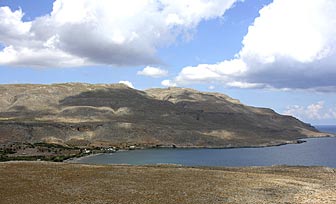 Kato Zakros lies at the eastern end of Crete. A green oasis in a stark landscape, in a bay very well protected from most winds, the only reason that it has remained a small place, without much of a touristic infrastructure, is because the Minoan palace of Zakros which was discovered in 1961 is still not fully excavated. As nobody knows the full extent of the palace the government imposed a blanket ban on building in the area. But a few rooms, apartments and studios are sprouting up away from Kato Zakros on the way to Zakros.

Getting there: there is a public bus from Sitia twice a day, otherwise, you are much better off with your own car

Atmosphere: Kato Zakros is a peaceful little place in the morning and evening but during the day it gets a lot of visitors coming by tour buses as well as private cars.

Accommodation is very limited because of the law preventing new buildings but there are a few nice places. If these are full, you will need to look further up the hill (a car then becomes essential) or in the larger village of Zakros. Find accommodation in Kato Zakros

Shopping: in the village of Zakros, 5 km inland

Beach: pebble beach but the scenery is great

Additional comments: Kato Zakros is famous for its Minoan palace located only 100m from the beach and a visit is a must. If you are staying in Kato Zakros, go early in the morning so as to avoid the guided tours crowds.
Also very worthwhile is the walk through the beautiful 'Gorge of the Dead' which takes about 2 hours. It is a gorge leading from Zakros to the sea at Kato Zakros and got its name from the numerous caves in which the Minoans buried their dead.