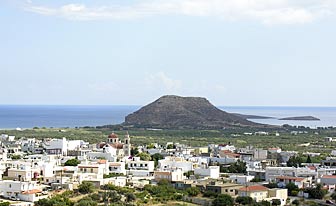 Palekastro is a large village (1100 inhabitants) with most people working in agriculture. But with its good beaches the area around Palekastro has started to attract tourism and slowly a good infrastucture is emerging for the independent traveler and holiday maker. The village is set back from the sea.

Getting there: There are buses from Sitia but you will be much better off with your own transport.

Atmosphere: Palekastro is a living village, not a tourist resort. So it is lively but 'Cretan lively'. The tourists who come as far as here are mainly looking for peace and quiet and what could be described as the 'real Crete'. Still a very laid back place.

Accommodation: a number apartments, studios and a few small hotels as well as 'Rooms for rent'. Both in the village and near the beaches. Prices are still very reasonable. Find accommodation in Palekastro

Restaurants: plenty of restaurants to choose from, both in the village and by the beaches.

Culture: the region was one of the most important commercial centres of the Minoan culture in the extreme east of the island of Crete. Accordingly there are still a lot of remains of Minoan culture especially at Roussolakkos (near the beach of Chiona. It is the only Minoan city to have survived intact. Its harbor, outlying settlements, sanctuaries, and quarries were preserved under sediments. Parts of this significant site may be threatened by a large touristic project.

Beach: the closest beach is Chiona, about 20 minutes walk from the village. This small beach of fine sand offers a better protection from the meltemi (a north wind that often blows in the summer months) than Kouroumenos. This is a long (over 2 km) sandy beach popular with w wind-surfers because of the frequent wind. Both these beaches are quiet beaches, even in high season but if you want it even quieter, there are more remote bays nearby.