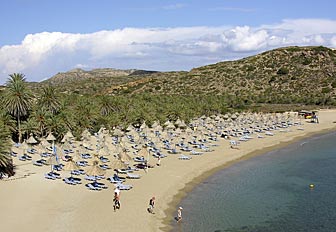 Vai is famous for its palm forest located right on the beach. It is the largest palm forest in Crete and these palms are endemic Cretan palms (Phoenix theophrastii) and were not imported inadvertently by Saracene pirates eating dates as some would like you to believe.
This superb beach, discovered by a few hippies in the 70s became a favourite with long term campers in the 80s until it got turned into something of a rubbish dump by their carelessness. A sad but not uncommon story in Crete and elsewhere. Finally, it was declared a protected area, camping was forbidden, the beach got fenced off and entrance only allowed during day time.
The beach entrance is free but you will pay a parking fee if you come by car.

Getting there: there is a public bus from Sitia several times a day. Otherwise it's best to go there by car.

Atmosphere: Vai is one of the main tourist attractions of Crete so the place gets very busy with tour buses as well a many visitors in rented cars. Mass tourism in eastern Crete.

Accommodation: none. The nearest place to stay would be Palekastro.

Restaurants: there is only one taverna in Vai (apart from the beach snack bar) but despite it's monopoly the prices are fair and the food is good. And you have a nice view of the beach.

Beach: the beach of Vai is beautiful but nowadays it is entirely fenced off and covered in beach beds and umbrellas. This certainly reduces its charm, especially when you add the masses of visitors.

Itanos is located only two kilometers north of Vai and whilst it only has a few palms it has three pretty beaches and no crowds (altough during the high season there are times when the beach can get crowded by Vai visitors escaping the chaos there).
Itanos was an important Greco-Roman harbour and probably inhabited since Minoan times. The archaeological site is right along the beach.
A very beautiful corner of Crete but its days might be counted: a HUGE touristic project is planned just north of Itanos. So go and enjoy Itanos whilst you can, it might change very very soon.